Reflections after “Aesthetics in Kinbaku” Workshop with Norio Sugiura in Copenhagen

We dived deep that weekend. Three days in a basement studying from a legend. Sugiura Sensei witnessed and greatly influenced modern Kinbaku over the last (almost) 50 years. Half a century! He knew Minomura Kou. He worked with all the great Kinbakushi of the late Showa area. And he created the visual aesthetic we now perceive as “typical” Japanese Kinbaku.

I had the great privilege and honor to be amongst other Kinbaku enthusiasts witnessing Sugiura Sensei’s second workshop organized and well prepared by Kinbaku Lounge Copenhagen.

It was intense. Everything felt highly compressed, as if we were diving into a deep dark blue ocean inhabited by alien and hence so familiar images. We started with 250 images covering 45 years of Sugiura Sensei’s photography. Sugiura San talked about the transition he made from analog to digital photography, and demonstrated pictures from both periods. It seems to be highly important to him, and, in my observation, he transferred and kept the habits from the old to the new world. There are no automatic settings on his camera. He is meticulous in measuring the light using an exposure meter (and not his camera as us “digital” guys would have done). Consequently his pictures have already the magic glare when projected from RAW format. It is easily to believe that there is not much re-touch to be done before publishing.

Sugiura Sensei was very generous in his sharing. All camera settings, the light settings, et cetera – he made it all available. But actually, that was not the point at all. What we witnessed was not a workshop on photography. It was definitely not the gear – it is how Sugiura uses it to create the magic. It was – maybe – a workshop on how to do better Kinbaku. It was – probably – a workshop on how to create a more intense scene. It was – without doubts – a teaching on humbleness, attitude and commitment for personal growth.

In total there were eight shootings: opportunities to watch, observe, learn – participate, support, serve. Every day we started with a shooting directed and photographed by Sugiura Sensei himself, with Riccardo Wildties tying Miho Ikeda. Witnessing alone these three sessions would have been more than enough value for this weekend. Watching Sugiura on set is so inspiring. He is almost 80 and still pure passion, dedication, energy. He is on duty all the time. He is directing the tying, changing the lights, measuring exposure – all at the same time. As a photographer, there were many observations to make: beside the meticulousness I already mentioned, it is most obvious that he looks before he shoots. He is in movement all the time, like a boxer maybe. He is incredibly fast. And: he doesn’t evaluate the scene through the viewfinder – he overlooks it, soaks it all in. I guess that’s how he sees all the details, the shades in the shadows, the reflections of the light. And then – when he has his “picture” – everything has to be fast. You are better not in his way. He wants everything from his model. And Miho gave it all, surrendering to his power. 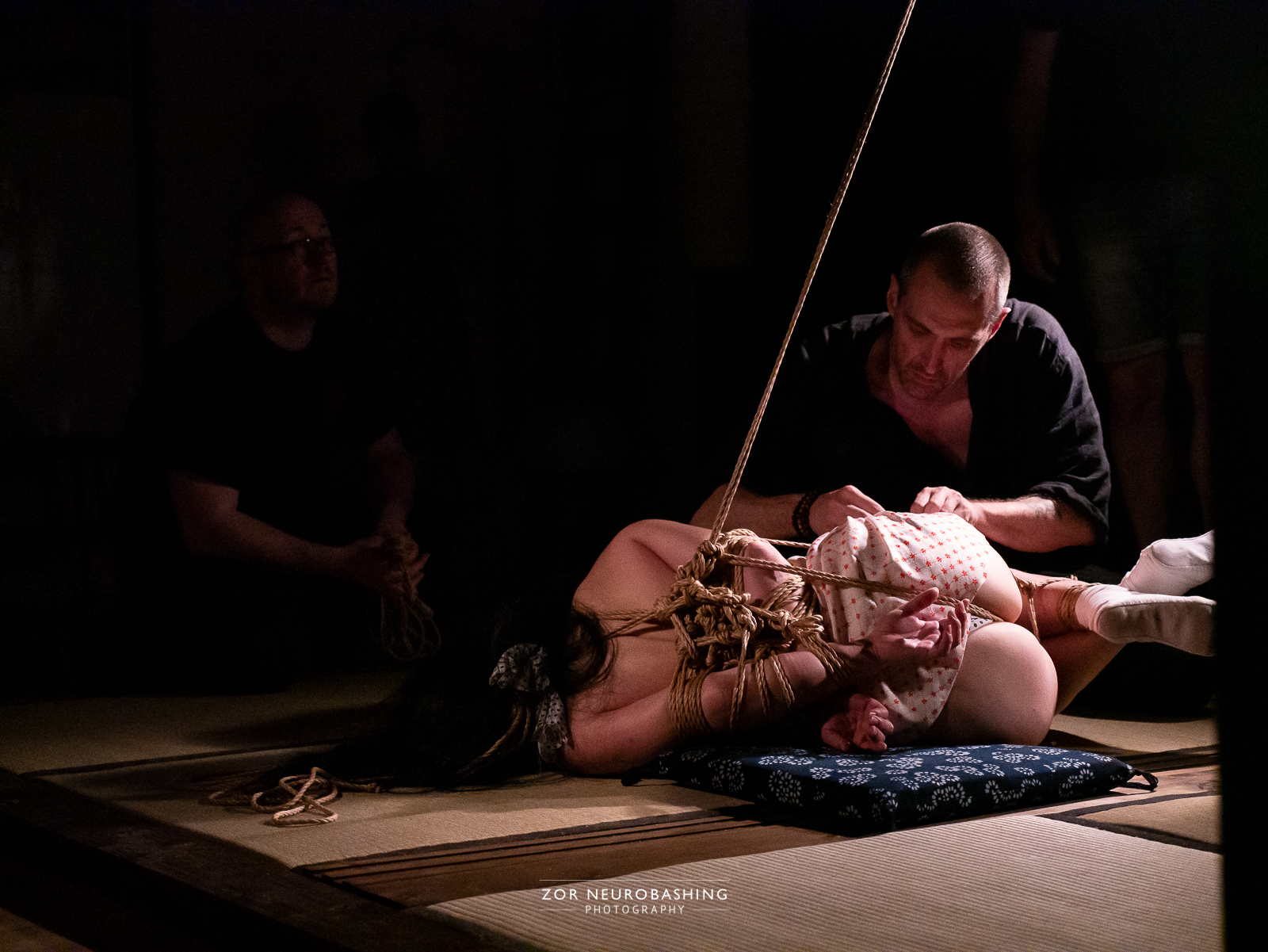 Photography is about light and shadow. Pay more attention to the details! (Sugiura Norio)

After the master(s)-sessions there was an opportunity for five teams to work under Sugiura’s direction to create their own set. Working under his supervision is stressful and rewarding same time. He gives his best – and this is exactly what he expects from the team. Be prepared. Be present. Be attentive. Anticipate. Be there.

We experienced Sugiura Sensei as very generous in his sharing, being friendly and even humorouis with us. And he cared about the models, asking all the time if they are safe. Hence, you better don’t make him angry. When you are a light assistant or a lifter – you better be fast. When you are the photographer – your better go down on the floor to get a better shot! Sugiura almost jumped on one photographer’s back, to help him to find a great perspective.

Hence, the learning did not happen in these directed teachings. There were many subtle (or not so subtle) opportunities to learn. Watching, inhaling, processing. Not only for the five team-models, but for everyone there was a lot to gain from just seeing Miho-san performing a scene. Often shy to speak, she still gave us very generous and deep insight in her phantasy-world she dives in during a scene.

On the third day, Sugiura Sensei became most intense and created a real seme-session. Miho-san allowed us into her mind-scape, just before she got exposed to Ishidaki-seme. The Edo-time love story she shared was deeply touching. It was not just about the story of a woman accepting the torture to protect the man she loves. It was also about Miho-san’s capability to surrender to her chosen story, to give her everything in the moment. The room became darker, colder – denser. We held our breath. All chit chat stopped. We could feel Miho-sans desperation and abandonment. I have to admit: I had tears in my eyes. Sugiura-san was patiently waiting aside, his camera ready, observing. All that crazy hastiness of the set calmed down. Silence. Than – he shot. Finally we could exhale…

And last but not least, what can we, the (wannabe) Riggers, take home? As I took the challenge to tie under Sugiura’s supervision for one of the team shoots and same time have had the privilege serving in Riccardo’s team and therefore was close enough to observe some details, I have to say: there is so much more to learn and so many things to practice. It is just amazing to see how fast Riccardo managed to adapt, to solve problems, or to adjust lines to make them more beautiful.

Hence, I think we can be all proud of us. We all had amazing and dedicated models, and with the help of Sensei, Riccardo and all the helpers we did our best to make them even more beautiful in their suffering.

Sugiura Sensei spoke a lot about creativity. Several times he tried to push the riggers out of their comfort zone of known patterns and routines. For one chest piece he said: “Riccardo, now play like a child!” But I think we should not take this advice wrongly. Sugiura San didn’t appraise the typical European “chaotic ropes”. He also said: “Get a solid basis first before you get creative.” He encouraged us to practice daily.

And actually, this also applies to the photographers (which closes the circle). As for the riggers, Sugiura Sensei insisted a lot on leaving once learned patterns. He literally said, that when he knows what he wants to do, he gets certainly a result, but it often looks boring to him. He talked about “mistakes” that turn into amazing pictures. He talked about feelingwhat is there to do next, not thinking it.

In that sense, the weekend was about coming (back) to an “empty mind”. In a way, Sugiura Sensei told us: “You (Gaijin) are thinking too much!”

I think it is in the name of all participants when I thank Scot and Tanja from Kinbaku Lounge Copenhagen to make the workshop possible and also for the great work they put in with their local team to create the beautiful set with all that beams and preps. Many thanks to Riccardo Wildties, who was there in every (!) set, supporting the team and keeping the models safe. And last but not least, thank you Sugiura Sensei and Miho San for putting so much effort, hard work, dedication and passion into that weekend. We all highly appreciated your generous sharing.

To finish this review, I want to share the impulse, Sugiura Sensei gave us, before closing the workshop:

“You have amazingly beautiful models in Europe, great locations, interesting light, well designed furniture – use it to create something beautiful!”

I think, it would be a shame, if we don’t follow these words. When we don’t change our approach to modeling and tying after this weekend, when we don’t change our Kinbaku photography at least a bit – then all that effort, that passion, that suffering would be for vain. Let’s not allow this to happen. Let’s work together to create something beautiful.