We are Alexander (Nawa Ronin) MA and Natasha NawaTaNeko. We tie together for almost 10 years. Kinbaku and especially Seme-nawa in the style of Akira Naka as taught in Europe by Riccardo Wildties has become an important and enriching part of our lives. We share our passion by performing and teaching Kinbaku together.

As a Kinbaku teachers, we strive to empower our students as quickly as possible to find their own path. We teach principles and elements, not fixed, rigid forms. Alexanders’ background as a scientist and Martial Art practitioner as well as his teaching experience from his day job feed into our teaching method.

Alexander is a researcher, philosopher and experimentator. Since a long time he is fascinated by Japanese history and culture. Alexander studied Japanese martial arts on-off since 1986 and holds a black-belt in Aikido. He is also a scientist and member of an exclusive club of rope nerds that hold a PhD.

After experimenting with several teachers and styles, Alexander found his home in traditional Kinbaku and the Art of Semenawa of Akira Naka. He became a student of Riccardo Wildties in 2016 and the first Certified Instructor for Kinbaku LuXuria Naka Ryu in Germany in 2018. 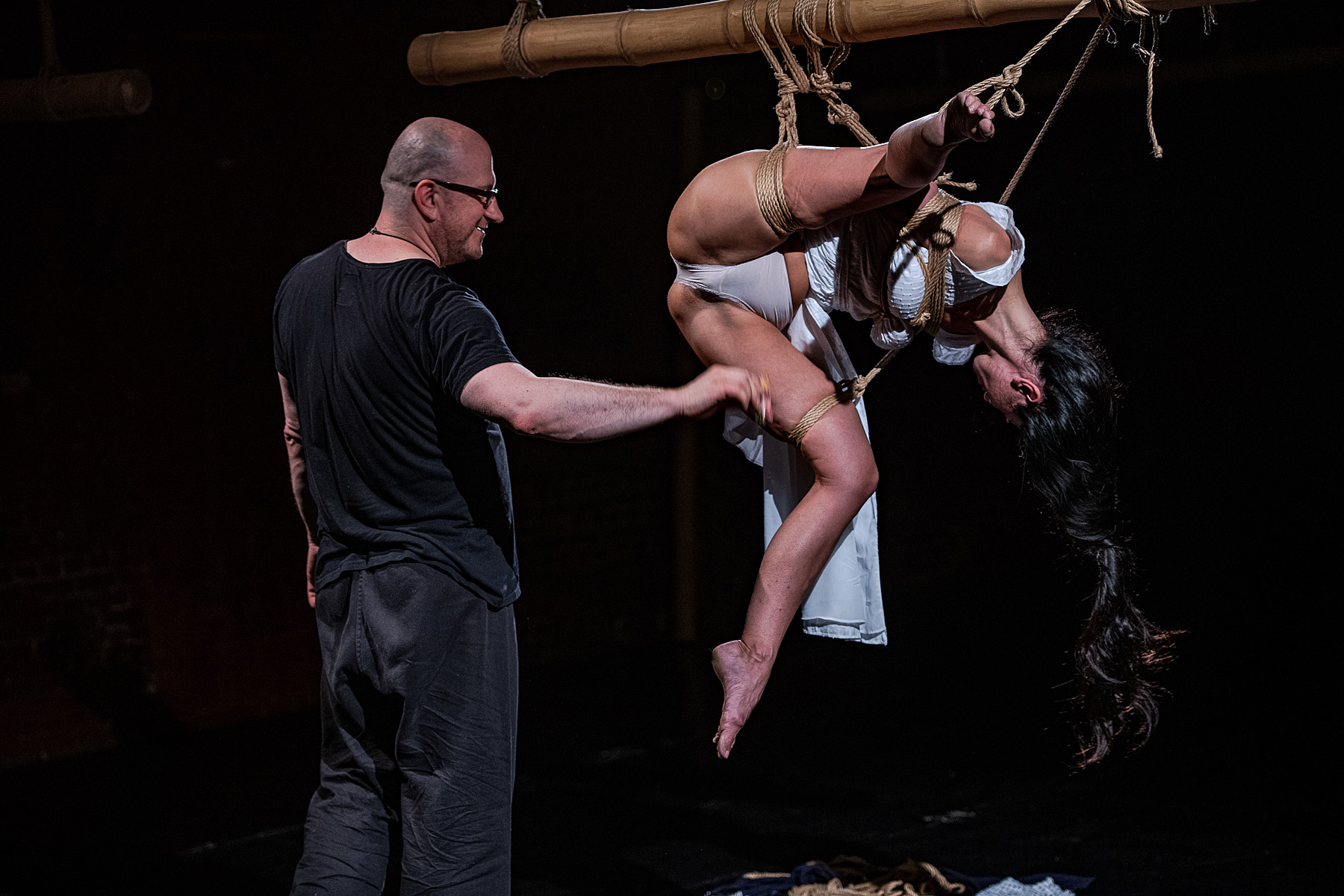 Building on her background in Sexological Bodywork by Joseph Kramer and her studies of “Wheel of Consent” by Betty Martin, Natasha brings different somatic aspects as breathing, movement, posture, non-verbal communication, and placement of attention in our teaching. She developed “Somatics for rope bottoms” to deepen their experience in ropes and make it more internal, conscious and safe. 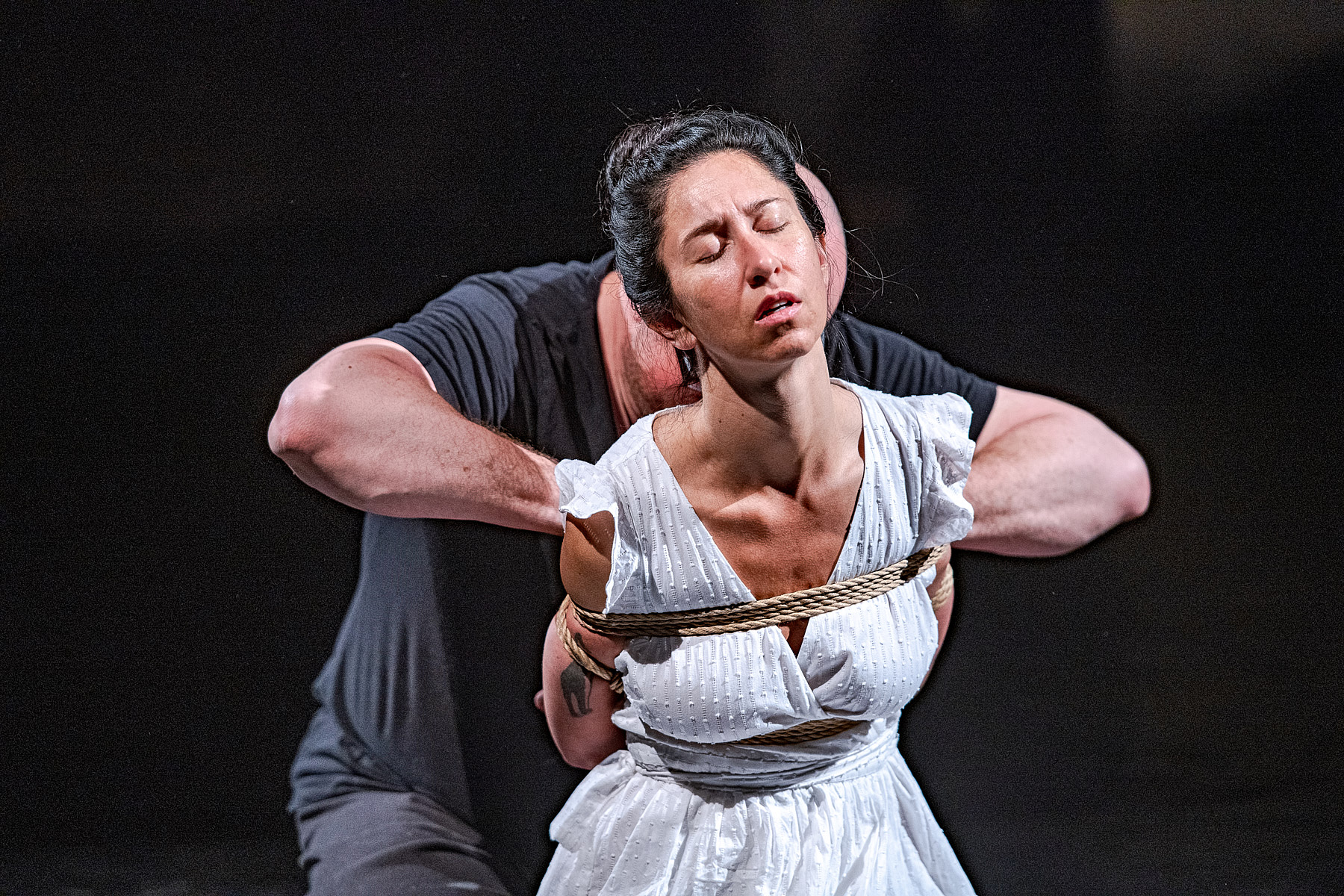 I love rope for that it’s honest. Real. Tangible. With rope, you can learn to surrender, you can learn integrity. You can learn to be generous – and grateful. If you engage in a rope play – I mean really engage, with the full heart, it will inevitably transform you. I’m into a challenge of two people coming close, very close together, a challenge of exchanging a gift of a focused attention and connection, becoming vulnerable in showing themselves as they are and letting other see them”

We believe that a style, a lineage comes from respecting and cherishing the elders, the ones who walked the path before us. We are grateful to all the people who contributed to develop Kinbaku to what it is now.

We feel especially inspired by the following individuals, we have the privilege to learn from. 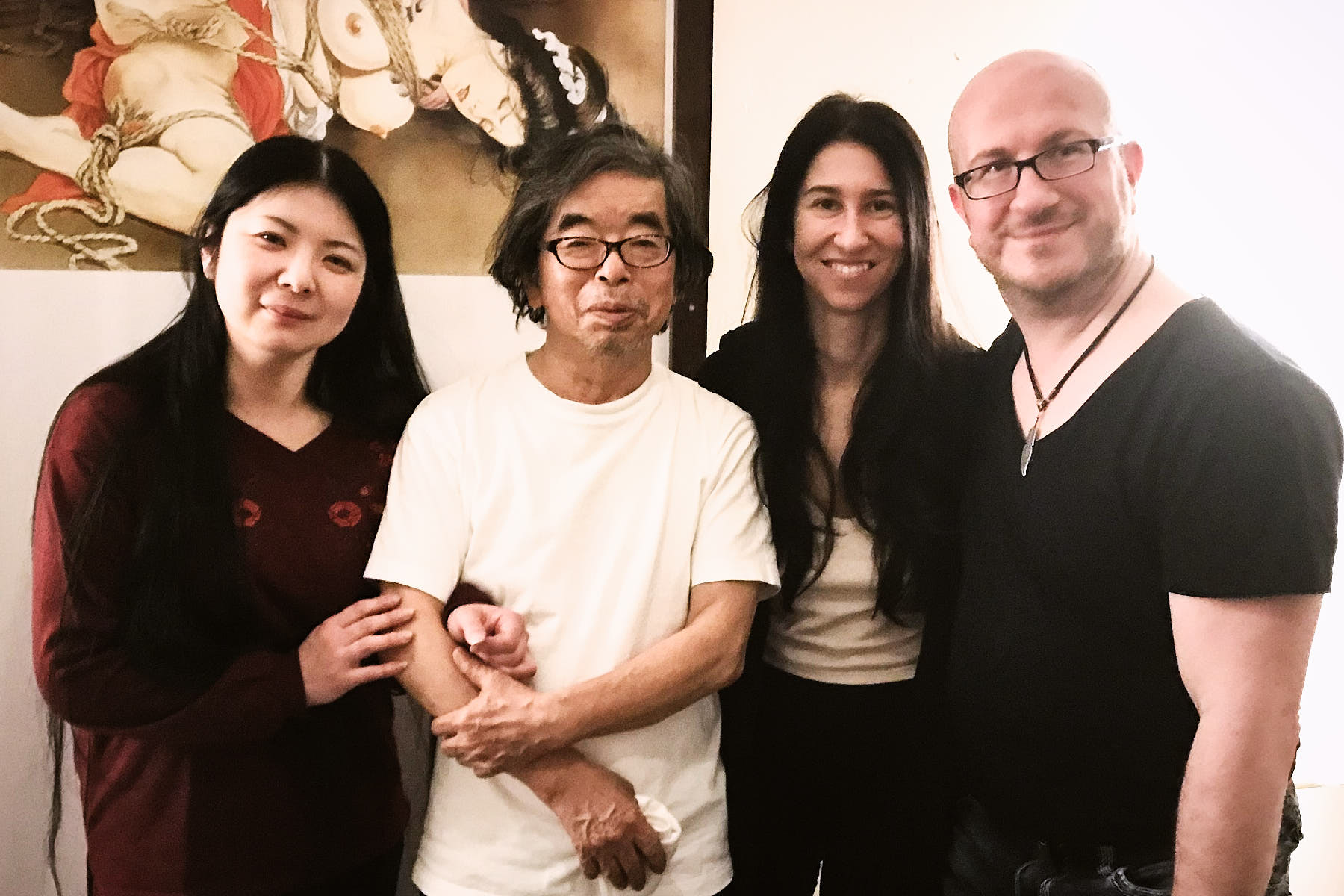 Sugiura Sensei has been photographing Kinbaku for over 45 years, contributing in establishing an essential aesthetical current.
Naka Akira himself mentions their many years of collaboration to have immensely influenced his subtle and dramatic sense of aesthetic.
We had the privilege to participate twice on workshops with Sugiura Norio and his muse Miho Ikeda, where he transmitted his knowledge of the artistic, visual and dramatic elements and possibilities of Kinbaku. 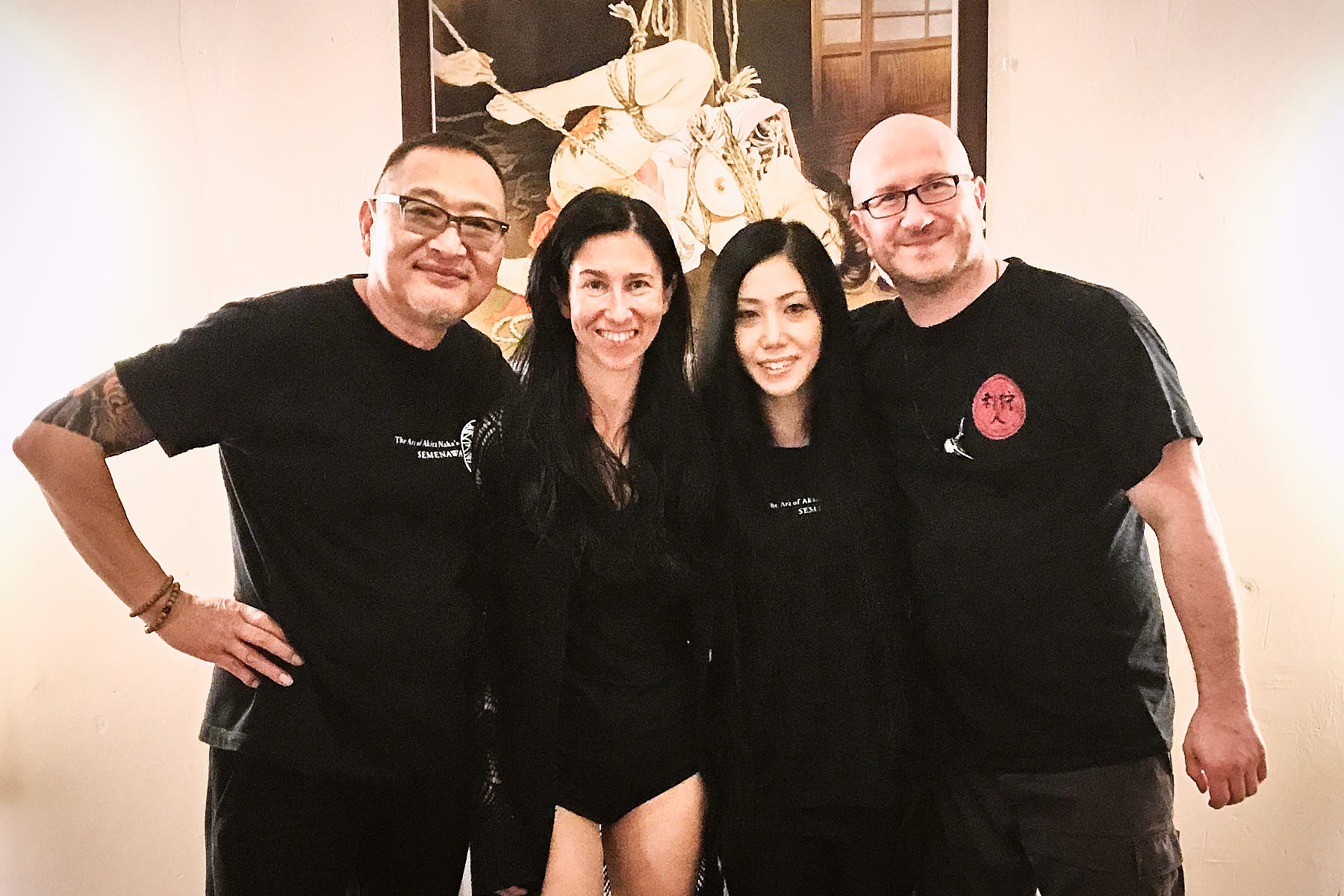 “Akira Naka became aware of the world of Japanese bondage at the age of 30, when he discovered a study class (commonly known as ‘Kinbiken’) of top master Chimuo Nureki. From the very first moment of watching the bondage master at work, he found himself drawn in deeper and deeper by the fascinating sensuality until he had an epiphany – ‘This is what I want to dedicate my life to.’” (Quoted from Akira Naka’s Official Site) 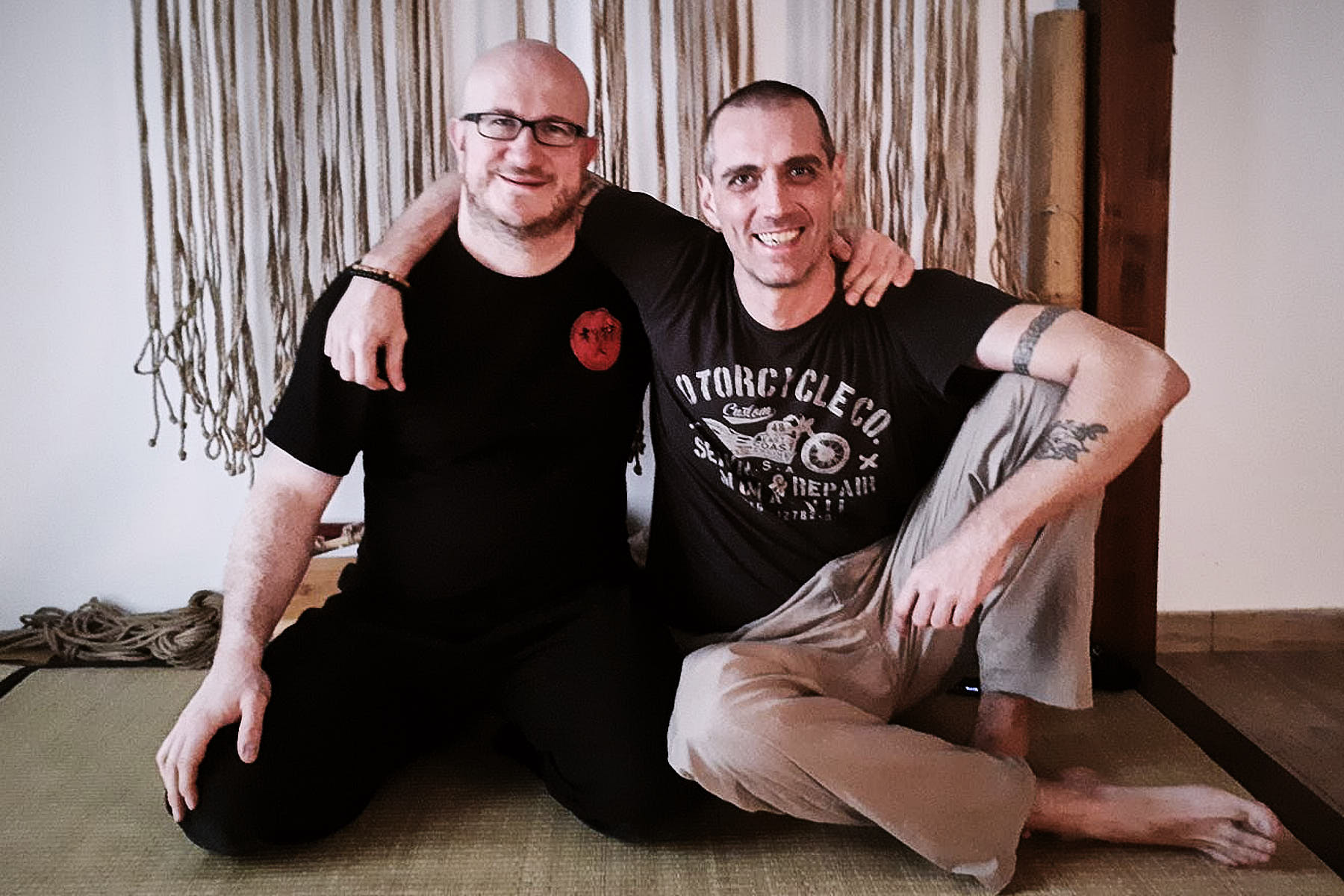 We are founding members of the Kinbaku Society of Berlin, and editors in chief of the quarterly magazine issued by this society. Alexander ties and creates Kinbaku Photography. 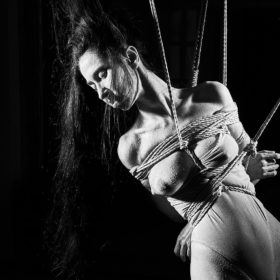 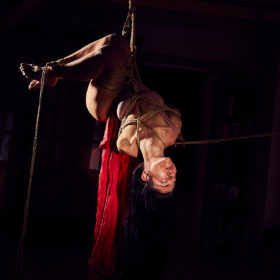 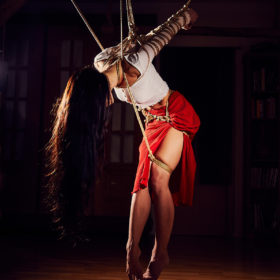 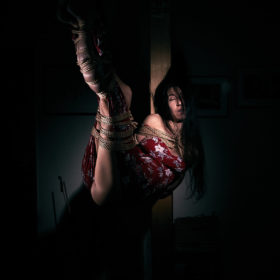 We offer private classes and workshops internationally and in Berlin, and we are open for invitations to perform and to collaborate in art projects.